The Quick Guide to Affiliate feeds for Joomla 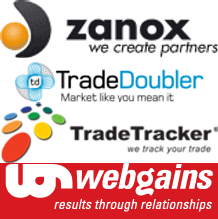 The first versions of this component targeted on the dutch affiliate marked. Nevertheless the component can be just with several international affiliate feeds like tradetracker, zanox, webgains, affilienet and basically any type of csv datafeed. Most of this site is still in dutch and the component has still some dutch leftovers, althought translations in English and German are part of the zip. Please feel free to email questions and report language issues.

The fastest way to get started and learn about the use and configuration of the component is to download the complete joomla install including the component. Depending on your experience creating a database and installing joomla it might take less then 10 minutes. After installing go the datafeeds section in the administrator and run the import.

Joomla already up and running?

Install the component on your joomla site. After installing go the datafeeds section in the administrator and run the import. The install contains some example feeds.

All installs contain example feeds, please be aware that these feeds do not link to your affiliate account.

All packages can be found on the download page

The Power of this component

A extremely powerful part of this component is the usage of 'callback' functions. These functions allow for manipulating the data before it's inserted into the database. Common problems in datafeeds are the variety in spelling of items ( TV - Television) and single plural ( T-Shirt - T-shirts). Callback functions can solve this. Callback functions are simple php scripts

Articles & Faq's and How To's

The component has the same system requirements as joomla, in addition it requires curl or the php setting allow_url_fopen set on (prefered). The component is tested against the latest version of joomla 1.5

simple test script to test the basics: req-test.zip, put the containing php script on your server and load it.

For importing large feeds access to the command line version of php is recommended.

Old versions of mysql ( < 4.1.2) will not support database collation, this might result in problems with special characters.

Solution are to use only csv feeds or to add define('LIBXML_BUG','yes'); into the scripts feeds.php.

The parse can be used as standalone import tool/data converter. Like to convert datafeeds into rss or into html pages

Another concept could be to set up a basic joomla based affiliate store en use the rss feeds on your main site. Almost every cms has some plugin/extension/module to show rss feeds.

These kind of rss display does not import the data it is chached for a limited time. Therefor old products will automaticly disappear from the sites, as long as you maintain the feeds on the main joomla site.

This plugin has cost me countless hours of work, if you use it, please donate a token of your appreciation!